Bir Hospital oxygen plant, which has been vacant for seven months, could be built for Rs 3.5 million, but it was not built 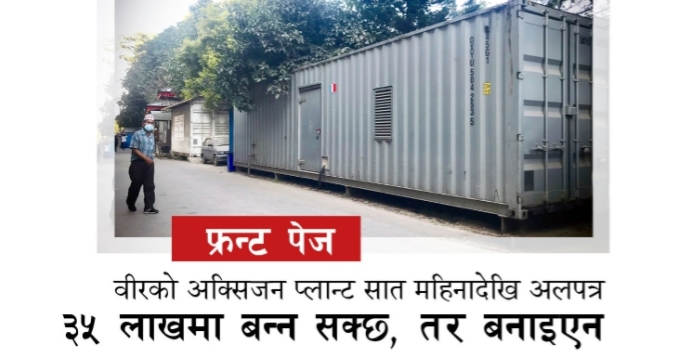 You don’t have to go anywhere to see the government’s sensitivity towards the health of the people, just look at the oxygen plant of Bir Hospital. The oxygen plant, which broke down last April, is estimated to cost Rs 3.5 million. However, the plant has been abandoned for seven months due to lack of the same budget.

The country’s oldest hospital, Bir, has been providing services to needy patients. However, tens of millions of rupees are being spent on the purchase of oxygen cylinders at the same hospital due to lack of maintenance of oxygen plant even during the epidemic.

The oxygen plant, which was purchased for Rs. 26.6 million in April 2018, was damaged last April. The plant, which can produce 151 cylinders of oxygen daily, is now vacant in the hospital premises.

Doctors say that about 20 percent of those who are hospitalized need oxygen at any time. Doctors also say that if more oxygen can be used then we can reduce the number of patients going to the ICU and ventilator. However, the government is not sensitive to the supply of oxygen to the Covid Dedicated Hospital Bir.

At present, Bir Hospital is buying and operating 90 to 100 cylinders of oxygen daily. ‘Millions of rupees are being spent on oxygen alone. On top of that, the hospital does not have enough money now. Oxygen suppliers have also said they will increase the price of oxygen, ‘said the hospital’s director, Dr. Kedar Sentury says, “We want to bring goods from abroad, but we can’t say when they will arrive. We plan to repair them as soon as possible.”

Lacking resources, Bir had demanded Rs 320 million from the government. The hospital administration has stated that it has not been able to allocate any priority as it has received only Rs 20 million. The hospital has stated that it has to pay allowance to the health workers for purchasing PCR machine, PPE, mask, but due to lack of money, no work could be done easily.