What does the government do for the citizens? Nepalese Government 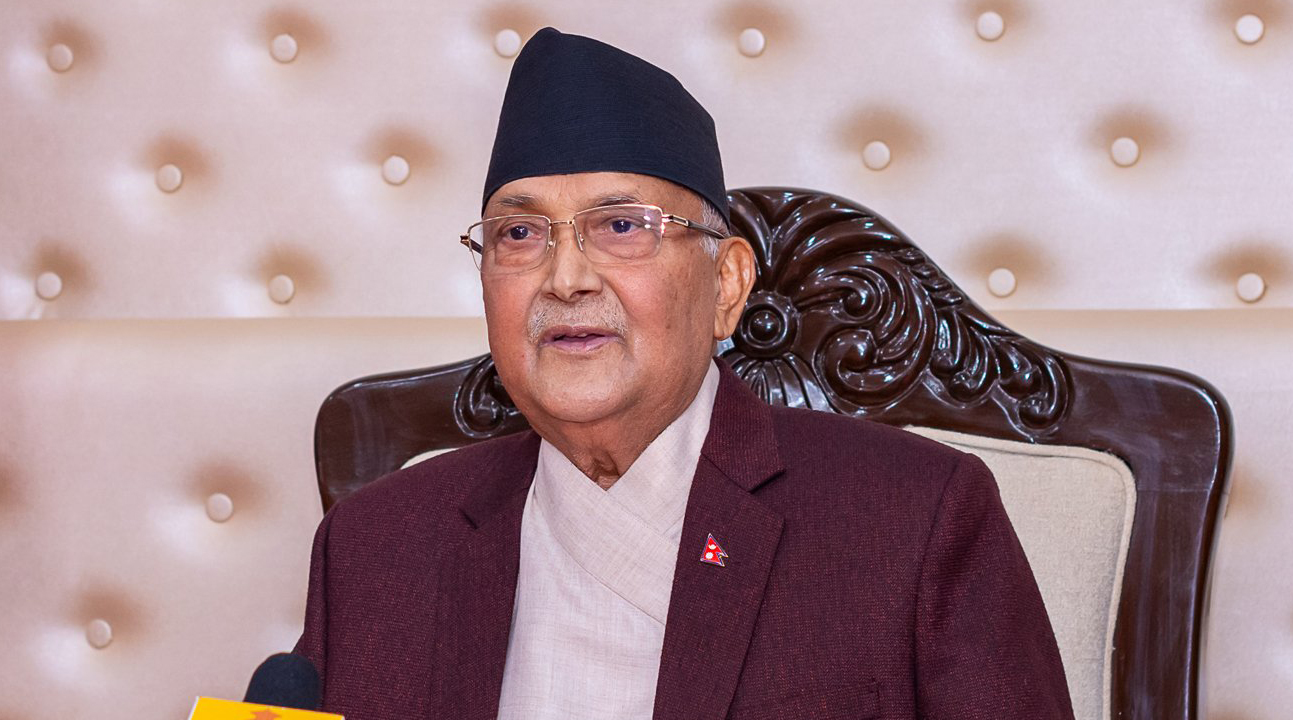 In a press briefing on Sunday, the spokesperson of the Ministry of Health and Population, Dr. Jageshwor Gautam, said, ‘Only the categories separated by government; will be helped by government. The announcement added to the public’s anxiety.

The government has come up with a clear policy for the people – test for Covid 19 and treat it at your own expense. Although the scope of PCR testing has been reduced, the government has taken an unfortunate decision to increase the number of infected people and not to reassure the people.

The government tried to avoid the health protection of the citizens while the doctors warned that the situation could get worse as the shoppers for Dashain ignored the health protocol and the number of people going to crowded places increased. When the people’s representatives from the parliament to the lower level understood the tithe allowance during the epidemic, the government gave a gift to the citizens on the tithe – the government cannot take responsibility for the treatment of covid.

Many slammed the communist government’s decision to share the dream of a socialist-oriented state. Criticism on social media, political parties have urged to correct the decision. However, the government is not thinking of reversing its decision. Therefore, questions have arisen and pressure has increased on the government to reverse the decision.

Perhaps not only the opposition but also the leaders of the CPN (Maoist) have demanded the government to convene a meeting with the opposition and experts for a serious review. Some small parties have warned to agitate if the decision is not correct. Although the Supreme Court has ordered a free investigation, the government has not considered it necessary to listen.

The National Human Rights Commission (NHRC) has urged the government to ensure the constitutional right of citizens to health by providing free health care to Corona-infected patients. The commission has pointed out that the government should not go against the provisions of the constitution and the act.
Senior leaders of the ruling party have criticized the government’s decision. Former Prime Minister and senior CPN (Maoist) leader Madhav Kumar Nepal has also demanded the government to immediately reverse the discriminatory, irresponsible and unaccountable decision taken to create more terror among the people.

“Such a decision is totally inappropriate as the state should be with us as guardians of all citizens in times of crisis,” he said. The government cannot abdicate its responsibility to treat all citizens equally during such an epidemic. It is also a serious matter that the government should not be too sensitive to the problems of the poor, destitute and economically disadvantaged, helpless and economically disadvantaged people, ‘Nepal said in a statement on Tuesday. I strongly urge the government to immediately reverse this discriminatory, irresponsible and unaccountable decision taken to create more terror among the common people by treating all citizens.

‘The all-round crisis created by Covid-19 is deepening. We all have the responsibility to control and manage it and basically the government. It is also clear that this is an epidemic and a global phenomenon that cannot be solved immediately by our own will. However, none of us can shirk our responsibilities,” said CPN (Maoist) spokesperson Narayan Kaji Shrestha.

He suggested to the government, “The government needs to review its policies, plans and decisions so far, taking into account its responsibilities and relevant legislation, and take immediate steps to make them more effective.” At the same time, all political parties and all sections of the society should cooperate in this. It would be appropriate for the government to convene a meeting of political parties and experts, including the opposition, as soon as possible. ‘

The Congress has urged the government to take special measures to protect the people from the epidemic by providing free corona testing and treatment. “Congress has taken the decision of the current government, which is proving to be a failure to protect the people from the Corona epidemic, from taking responsibility for testing and treatment as a very serious act of responsibility,” said Congress spokesperson Vishwaprakash Sharma in a statement.

And, the Congress has a question, ‘It is the duty of the government to shoulder the responsibility of all, considering the impact Corona has had on the economic life of the people. Even in accordance with the legal provisions for the treatment of infectious diseases, the government cannot shirk its responsibilities. Since the government has not complied with the Supreme Court’s order to make arrangements for free some time ago, who will listen to the government if the people, media, opposition and the court do not listen to anyone? The question has arisen.

The Congress has said that “there is a terrible question mark in the intellectual and material existence of the government”. He said the uncertainty at Covid Hospital, delays in preparing community isolations, lack of ventilators, black market of remediators, unorganized quarantine and even a policy on corpse management have raised serious questions about the government’s “intellectual and physical existence”. It has been confirmed that the government itself is determined to end the illusion that there is a government in the country after it has shied away from the responsibility of treatment.

Former Prime Minister and JSP leader Baburam Bhattarai has a question, ‘Corona treatment cost do yourself. Go to the hospital as soon as you are unconscious. Unemployed workers return to the village crying. Workers returning from India go hungry and return to India on the eve of Dashain. Do whatever the students who have been stranded for months after the school-college closure. Surrounding commissions and allowances as burp. Why such a government is needed? ‘

A press statement issued by the CPN (Revolutionary Maoist) led by Mohan Vaidya said, “The government’s decision to conduct the examination, treatment and management of the corpses of those infected with Covid-19 is a play on public health.” This is against the belief that basic health is a fundamental right of a citizen. In a critical situation, it is necessary to raise a strong voice against corruption, irregularities and public health games, demanding the repeal of the decision taken by the government.

The common party has demanded the government to immediately rectify such a decision against the provision of the fundamental right of every citizen to get free basic health care from the state and even the recent order of the Supreme Court. His question is, “How can a government led by Prime Minister KP Oli, which has spent millions of rupees from the state treasury for its treatment in Nepal and abroad for years, run away from its constitutional obligation by arguing insensitively and irresponsibly that the state cannot afford the treatment of citizens during the Great Depression?”

Spokesperson of the masala Ram Prakash Puri said that the government’s announcement that it would not take responsibility for the treatment and that the patients themselves should take responsibility for it was irresponsible. The government has demanded to take back its decision and declaration and provide services to the people by making all-accessible, scientific and appropriate arrangements for the control and treatment of Kovid-19.

Twenty-one political organizations have warned against the government’s announcement that the government will not be responsible for the treatment of Kovid-19 and the patients will have to take responsibility for it. CP Gajurel said in a statement, “If the decision is not overturned within three days, we will be forced to take to the streets to protest against the Kovid-19 epidemic.”

What is the effect? Former health minister and Congress MP Gagan Thapa says, “After Sunday’s decision, there is no difference between the people and the government.” In a democratic setup, there is no place to go below this. No one could have imagined such a thing. Now the citizens have started debating why they should pay taxes. The government’s decision sent a message that I was not in trouble. Meaning there was a crisis of faith. It is very difficult to play a basic role in such a crisis. ‘

However, addressing a regular corona media briefing organized by the ministry on Tuesday, Health and Population Minister Bhanubhakta Dhakal claimed that the health infrastructure was ready to treat all the citizens.

At present, there are 956 covid ICU beds and 410 ventilators. This is a worrying point in itself. Infected people with serious illnesses is more concerned about the lack of ICU beds and ventilators. Lack of it can increase mortality. As of Tuesday, 765 people had died due to cobwebs. So far, the number of infected has reached 139,129. The number of those who have recovered is 96,609. At the same time, the number of active infected people has reached 41,755 so far.

Many infected people are at risk of dying without a ventilator. The government has not considered it necessary to comply with the recent Supreme Court order to make arrangements for free. Political power, civil society and the media have questioned the government’s policy.

No attention has been paid to the investigation of the scandal linked to Covid-19. However, the government also says – test the corona yourself, the cost of treatment yourself. This begs the question: what does the government do for the people? And, together, another question naturally arises: what is more important to the government than the lives of the people?